Home is a 2015 computer animated film starring Jim Parsons, Rhianna, Steve Martin, and Jennifer Lopez, and the cast is probably one of the few stand-out things in this otherwise unremarkable children’s movie. In fact, the only reason why I initially bothered watching it was because I was interested in seeing Jim Parsons voice the main alien character, Oh. I wasn’t expecting much from the film, and in the end I didn’t get much either. The animation was pretty standard, the humor rather flat, and the story very unoriginal. So what is the reason I am writing about such an ordinary sounding film? It is because of its place in movie history, with its main human character, Gratuity “Tip” Tucci, who is 3D animation’s first female person of color in a lead role.

Let’s get the plot out of the way first. The story is about an alien race, known as the Boov, taking over Earth in their attempt to run away from a bigger, badder alien race known as the Gorg. The cobbled together opening sequence hurriedly explains the events where the Boov invade Earth and manage to relocate all humans to Australia. However, they somehow managed to miss one particular human – a young pre-teen girl named Gratuity “my-friends-call-me-Tip” Tucci (Rhianna), who is searching for her mom (Jennifer Lopez). She ends up meeting a Boov, named Oh, who is on the run after accidentally alerting the Gorg to their location. What follows is your typical tale of a couple of misfits befriending each other and saving the world from impending doom. It’s highly derivative (cough cough Lilo and Stitch cough cough) and has your standard kid’s movie message of friendship and understanding. The majority of the film involves Tip and Oh traveling the world in order to find Tip’s mom and fix Oh’s mistake. Included are smatterings of loose character development and an annoyingly large amount of toilet humor. The “bathroom mints” scene is particularly cringe worthy (and also literal toilet humor). I don’t know, maybe the kids found it funny. The animation is all right, but nothing absolutely spectacular. The bubble-theme with the Boov technology is rather interesting, I suppose. I enjoyed some of the film’s music which was done primarily by Rhianna (and a bit of Jennifer Lopez). On the other hand it seemed to be more of an advertisement for her music, a la Phil Collins and Disney films. 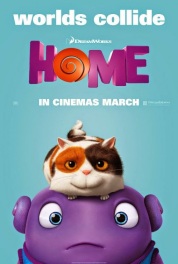 Dreamworks Animation
Because apparently the cat is the more important character…

What shines through this otherwise mediocre film is that along with the message of understanding between different races and cultures (i.e. human and alien), it also has a lot of racial diversity. As stated earlier, Home made history by including Tip as 3D animation’s first lead who is a female of color, which is sad considering computer animation has been around for over 20 years. I find it kind of disheartening that this wasn’t noted as much as it should have been when the film came out, especially with Hollywood’s failing to be demographically diverse in the “female” and “of color” categories. I also find it sad that the movie wasn’t as great at advertising as it could be. It’s almost as if the movie was trying to hide Tip in its advertising, with its main poster featuring just Oh and Tip’s cat, or the second movie trailer focusing more on Oh (whereas the first one shared screentime between our two leads). This is atrocious because Tip is essentially the star of this film, and the lack of advertising of her shows everything that is wrong with Hollywood’s embedded racism and sexism. Not only does it do a disservice to a large demographic of its audience, it does a disservice to the character, since Tip is decently well written. She’s got your basic middle school problems of not fitting in, especially having recently moved from Barbados with her single mom. It’s the search for Tip’s mom that actually drives much of the plot, as well as the motivations of familial love. She’s got a cool personality that shows bravery and confidence, despite also being scared at having to traverse the world amidst an alien threat. She’s well animated, too, with beautiful natural hair, and realistic body proportions that doesn’t scream at young female viewers to develop eating disorders.

Another nice touch on the animation’s part is the background extras. In the scenes where there are crowds of people around, I noticed that there were people of many different races and colors. It takes time, thought, and effort when you are animating and creating backgrounds, so there had to have been a conscious effort to do this. This detail popped out to me because I realized how rare it is to have that amount of diversity on screen in movies, even in the background characters. I mean, it makes sense that if you were to gather all the humans on earth and put them in one place, as the Boov did, 70% of them would NOT be white. But I guess I was surprised for something that came out of Hollywood to make sense, especially in a mostly innocuous movie such as Home.

Home is not a great movie, and it is definitely purely a kid’s movie and may not be as enjoyable for adults. But that’s all right, because it’s probably a movie that your kids should see. Tip is a cool role model for kids, and we need more young female people of color in a role that kids can look up to. In specifically this area, we need more movies like Home and we need more characters like Tip.