Alright people… first I have a couple different ‘housekeeping’ things to take care of.

1. Stickers… yes you saw that right. Rooster Illusion now sells stickers! They’re like two bucks and they’re awesome. So get one from this link:

2. Soon, hopefully by the end of the month…I will be posting a piece on the comparison of Frank Underwood and Walter White–two prolific leading male TV characters over the past couple years. If you have any thing you would like to share with me on either show/opinion on each character… please contact me here or at my email address: sibbitts@gmail.com

If I like it, I’ll feature you on the piece!

3. At the bottom of each of my posts, I will start linking music I listen to while I’m writing the post. Feel free to check it out. Could be anything from cool local artists I have found to Bowling for Soup’s Greatest hits! Who knows!

Without further ado, Episode 5 recap! I will try and keep it concise, but remember people, this is where the episodes start feeling like they’re hours long. So, I will try and combat that as much as I can.

If you haven’t seen the episode, I suggest waiting to read this post. Spoilers ahead.

First off, the episode opens with an…interesting scene. A threesome involving Chinese leader Xander Feng. Why is it there? Not too sure. I guess it shows a certain personality trait that isn’t further expanded on in the future episodes? I think it primarily just sets the tone for the episode. But, did it need to be there? Meh. Frank is currently out of the capital and on a little field trip to Spotslyvania for a war reenactment. Is he amused? Not quite. Is he glad to get out of DC? Absolutely. But his foreign affairs can’t be too foreign if he invites Feng to Virginia to talk. A little odd, isn’t it? Frank out in the middle of the woods with a bunch of impersonators and a Chinese billionaire leader. Like I said, interesting episode.

The reason they’re meeting is simple. The US President wants a bridge over the Long Island Sound. Feng has the interest and money to do that. But, the U.S. currently has a lawsuit against China in the World Trade Organization over currency manipulation. So…as my friend Julie would say, “(Ma)ssage for (Ma)ssage?”. Frank clears up the lawsuit…Feng will build the bridge! Everyone is happy! Except one person…Feng. “Wait what?” Yeah…Feng. In fact, he would rather KEEP the lawsuit…because it will in turn make him and a man named Raymond Tusk a little richer. Last time I checked, that’s not legal. But, if he makes it seemed like the U.S. forced him to do it, then the Chinese public won’t notice.

Confused, Frank sits with his head in his hands. But anyone can see that this Feng dude…is not the kind of guy you would bring home to your mother. Or home alone to your apartment. Or really anywhere for that matter. Except maybe some cool underground German sex party. Geschlechtsverkehr Partei!

Frank, however, sees this as an opportunity for domination. If he can drive a stake between Feng and Tusk (probably his main enemies at the moment) could he rise victorious? Possibly. So this whole episode is really based around that. Talks between all three of them occur, and Frank even sends Stamper to try and reason with him. But after the recovering alcoholic swats a drink made with a $40,000 liquor out of Feng’s hands… you know Feng is a ‘gunna be pissed! But, Doug is Doug. He does what he wants, while doing with Frank wants. That’s why he is my favorite character.

That is the pinnacle of the episode. But I’ll still recap the other characters because it will help you with what’s going on next in the following episodes.

Lucas: Basically is convinced by the hacker dude that he needs to get into AT&T’s servers, in order to get the phone records he needs. This is merely a setup, but he is Lucas. He gets arrested and sentenced to 35+ to life. And seriously, has he showered yet this season? And has he even really worked a single day yet? These are things I think about while you’re working America!

Claire: After her stunt on CNN, Claire is making sure her tracks are covered and trying to turn this into a positive thing for her and Frank. Enter a new character into the light, Seth Grayson. After Seth acquires a journal of health records from the doctor Claire received her abortion from, he insists on being hired as a communications director for the Underwoods. What’s his resume? This journal biitttcchhhhhh. But seriously, kinda shady… but maybe he will be trusted.

Stamper: While in china, all that is in Stamper’s mind is Rachel, the Russo call girl he has been protecting but at the same time falling in love with. But, he kind of seems like a father figure to her, so that makes it weird. But, alas, this will progress later in the season.

U.S. President: WHERE IS MY GODDAMN BRIDGE?!

Well, there you have it! Kind of short…I guess. Sorry about not throwing a lot of pictures in there… but here is one of my favorites from the season (which happens to be in this episode). 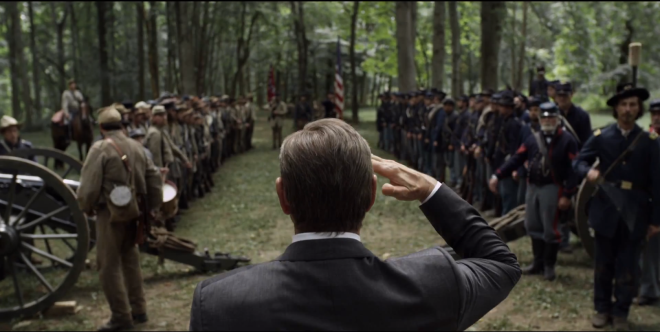 Salute… salute to your sensei! – http://bit.ly/1gzaElT

Here is another poll for the week. Feel free to give your thoughts!