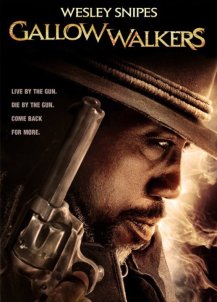 Hey all, sorry about last week, I had the flu/was traveling. Rest assured that we are coming back strong with a Wesley Snipes movie about zombie cowboys. I’m so excited!

We open with a small child dumping buckets of blood into a well, so basically, we start with a bang.  Then Wesley Snipes deposits a body, chops off its head, and we flashback to a weird like, “Rape this woman so you can be a man,” sequence involving said dead man, plus one cheesy prop head.

Now, right off the bat, this movie is beautiful. Possibly because I’m a massive sucker for saturated long shots with a few key focal features and colors, but also because that’s an aesthetic most people can get behind. Someone shows up with their mouth sewn shut (with a prosthetic that doesn’t quite hold up to camera), although he can still speak okay. There are clearly nods to traditional Westerns, which I rather appreciate. I like a horror movie that knows its roots and embraces them instead of fighting them. Snipes’ character is immediately established to know his way around guns. He handily removes the spine of the sewn-mouth-man, but the effect is very ‘Street Fighter’ and less Machete

15 minutes into the movie and I have no idea who I’m supposed to be rooting for, or who the bad guys are (other than the much alluded to ‘gallowwalkers’) and a lot of people have been shot for no apparent reason. Some prisoners are being taken to a weird religious town that just hangs people for no apparent reason, or for thinly veiled reasons. The zealots are quite odd, and then there’s a weird like, white-haired 80’s hair band style vixen murderess, and a guy with no skin (his prosthetics are passable at least). I’m assuming that the incoming band of renegades are also gallowwalkers?

Half an hour into this movie and I have NO IDEA WHAT IS GOING ON. Wesley Snipes has saved one random prisoner, given him guns and let him walk into a trap, which is apparently set by gallowwalkers. This is happening separately from the religious subplot, which is where the whore from the earlier prison group is also from. It becomes apparent that the trap is a test, and Snipes hires him. He finally offers some well-welcomed exposition.

So at this point all you need to know is that Snipes’ character lost the love of his life and then killed everyone involved, but he’s cursed, so they are now undead and he’d like to kill them for real. In the meantime, the gallowwalkers skin people so they can look normal-like, which happens largely at this religious camp. Now they would like to kill Snipes, so there’s a weird fight sequence with softly undulating electric guitar as Snipes and his alive recruit awkwardly fight the undead (minus the head honcho). Since head honcho wasn’t there, a final battle will ensue. The recruit gets stabbed, so Snipes shoots him so he’ll live. I know.

Boundless Pictures
No, seriously. What?

I’m not sure why, but the prosthetics/special effects work in this movie isn’t very good. The wigs are shiny and awkwardly styled and the choices to make things stylized is often bizarre, such as Snipes’ weird white beard. When the prosthetics work the best is when they are too ridiculous to believe, like the gallowwalker that opted to use lizard skin instead of human skin, or when the skinless man puts on a new face. Sometimes the stylized choices are really cool, like the swirling scars on the undead prostitute.

The costuming, on the other hand, is solid. The religious zealots wear white for the most part, but for some purple cloaking representing their false sense of superiority, stuff like that. Everyone’s western gear is pretty varied but mostly accurate. It’s really well done. All of Snipes’ clothing mimics the tattoo/scar of his dead lady.  It’s the little things like this that can really make or break a movie for me.

This movie reminded me a lot of Priest (2011) but Priest made buckets more sense (which is saying something) and had some really neat styling/acting/fight scenes, even if it was a self-indulgent cheese fest. Gallowwalkers on the other hand, didn’t really make much sense, and wasn’t quite self-indulgent enough to be a true B-movie, which was kind of unfortunate. Ultimately, Gallowwalkers suffers from a bit of ADD. It could have been a sweet western about a gunslinger shooting the undead, it could have been a horror movie about some undead who need new skin, it could have been many things but it chose to be all of them at the same time.

However, if you enjoy beautiful Westerns with obvious Guillermo del Toro references (and I usually do) and a decent amount of zombie action, even though the zombies by and large just feature crystal clear blue eyes, I would recommend this movie. Not that I recommend binge drinking, but I’m also imagining that this would be quite a good movie for a drinking game.