A mini review, what’s that? It’s something new I’m trying out, where I just give you the bare bones of a review. Usually when I don’t have much to say about a movie. Sounds cool. Hook me up, bro. I don’t think you can pull that off. Your shorts aren’t pastel enough. 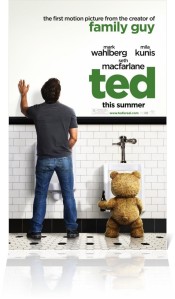 The Plot: As a lonely, friendless—probably because of his Boston accent—child, John Bennett made a wish for his teddy bear to come to life, so that they could be “best friends forever.” And it totally did, becoming a media sensation that eventually people stopped caring about. Years later, John (Mark Whalberg) is 35, dating the attractive, successful Lori (Mila Kunis), and working at a car rental place. He’s still best friends with Ted, but the bear is now a pot-smoking party animal. Uh oh! Will John be able to grow up and be the man Lori needs him to be? Will he have to finally let his bear go? Will the audience ever care? Eh…

Do you like Seth MacFarlane? If you do, then you will like this movie. If you don’t, then this movie is still better than an episode of Family Guy. But only barely. In fact, the character Ted is basically just recycled from Seth’s cartoon characters. I’ve never understood that man’s fascination with anthropomorphized animals having sex with people, but you can look forward to more of that here.

Now that I think of it, Ted has everything you’d expect from the brain of Seth MacFarlane: An over-abundance of pop culture references, a few jokes that try too hard to be edgy, and plenty of raunchy humor. Ugh. I hate that word. Raunchy. And, of course, there’s a requisite MacFarlane fight, where a human and an anthropomorphized animal beat each other up for just a little too long.

John and Lori’s relationship is sweet at times, helped by the fact that Mark Whalberg and Mila Kunis have good chemistry. That’s where the film almost works. Ultimately, however, the relationships between John, Lori, and Ted are smothered by MacFarlane’s adolescent humor and a really, really generic plot. The film pokes fun at plenty of romantic comedy clichés, but being aware of genre conventions isn’t enough. The story and characters need to be more compelling if that shit’s going to work.

Probably the best part of the film is the presence of Flash Gordon. John and Ted’s love for the film is endearing, and a surprise cameo from Sam Jones makes for a pretty great moment. Sam Jones played Flash Gordon in the Queen-scored 80s movie, by the way. Because I’m sure some of you didn’t know that.

The other best part is Patrick Warburton, and an even more surprising cameo from Ryan Reynolds. The rest of the secondary characters aren’t given much to do. Joel McHale, of Community, is wasted as Lori’s sleazy boss. Giovanni Ribisi is delightfully creepy as a man obsessed with Ted, but his plotline feels kind of just thrown together. Another talented actor given too little to do.

The lesson here—one of them, anyway—is that is that maybe Seth MacFarlane is going in the direction that everyone seems to think M. Night Shyamalan has taken. He’s just been putting out the same thing over and over, repackaged with different anthropomorphized animals and different people for them to fight and have sex with. MacFarlane’s humor appeals to some people, and that’s great. Personally, I’m tired of him. With Ted, he had an opportunity to try something new, and there are moments where you think it almost could have worked. Almost.

2 thoughts on “Mini Review: ‘Ted’ is Pretty Much What You’d Expect”