In my admittedly limited experience, Netflix’s original series are pretty hit or miss. They’ve gone on record saying that they want to become HBO faster than HBO can become Netflix, which means that like HBO, much of what they churn out is merely soft-core porn with high production values and sub-Athenian political intrigue. I’ve always felt that being free of censorship came not as an opportunity but as an obligation to HBO to be profane whether or not the story demanded it. Every so often, though, they come out with something good, something that exploits the opportunity or doesn’t. What Netflix has just accomplished, though, that HBO still hasn’t, is to release something that’s simply pure, sincere, unabashed fun. 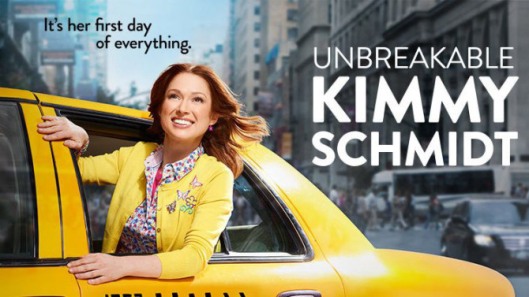 The Plot: After spending fifteen years in a bunker as part of an Apocalypse survival cult, Kimmy Schmidt (Ellie Kemper) is rescued and released into the world she thought had disappeared. Recognizing the injustice of her situation and the fact that she’d been brainwashed, she responds not with anger or depression, but by seeing this as a kind of renaissance, and takes off into the city of New York to get the most out of a strange new world. Luck seems to be on her side, and she quickly lands in a tiny, but cozy apartment owned by the batty but well-meaning Lillian Kaushtupper (Carol Kane), and co-occupied by the brilliantly named, incredibly gay, struggling actor Titus Andromedon (Tituss Burgess). Another stroke of fortune offers her a nanny job with the super-rich, spoiled Voorhees family, but it seems that Mrs. Voorhees (Jane Krakowski) may have an unexpected secret…

The first episode of this show is not good. Had it aired regularly on TV, I would not have felt obliged to tune in a week later for episode two. In this respect, the Netflix model really helped the show. I know that a lot of things have shaky pilots, and with the next episode easily available and only twenty minutes long, I clicked through and watched it. It was marginally better. I repeated this process as necessary because I was having an impossibly lazy Saturday, and although it took me a little while to decide whether or not I actually enjoyed Unbreakable Kimmy Schmidt, I eventually realized how rare a show I’d been watching. The reason I kept coming back was not because I was too lazy to stand up and do something else, although that probably contributed, but because I had fallen victim to its infectious positivity. Despite its serious premise, Kimmy Schmidt wastes no time in establishing its optimistic outlook. Our heroine has emerged from a rather unfortunate circumstance, and while her ensuing good fortune in meeting Titus and the Voorheeses is flat-out unrealistic, it’s mixed with enough bad luck to seem plausible and, much more importantly, the characters make it convincing. 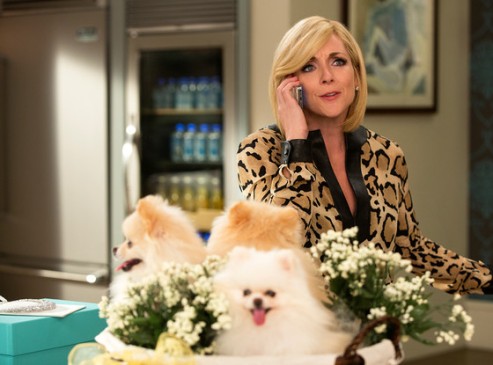 Netflix
Although, to be fair, Jane Krakowski makes a convincing rich person.

With the exception of the obnoxious teenage Voorhees daughter (Dylan Gelula), who rather perfectly embodies the special kind of rich and spoiled you’d expect from someone named Xanthippe Voorhees, all of the characters become immediately lovable. Kimmy’s positive outlook on life in light of, you know, the brainwashing and imprisonment, borders on inspirational, and Ellie Kemper’s natural charm and good humor does wonders for both the role and the show. Even Mrs. Voorhees quickly graduates from annoying social elitist to a troubled, sympathetic character. The (spoiler alert) twist that she’s hiding from her Native American heritage doesn’t hurt anything, either.

Other than the positivity, I guess that’s what makes the show work: although all of the characters are based on familiar types, those are used as mere foundations for original character development. For example, despite being an out of work gay black stage actor named Titus Andromedon, Kimmy’s roommate, once the writers get into the swing of things, tiptoes around the associated stereotypes of the role and eventually grows into a complicated person, rather than a loose, comedic caricature of out of work gay black stage actors named Titus Andromedon. That may sound like an oddly specific archetype to reference, but that’s only because I wanted an excuse to write Titus Andromedon again, because that’s a weirdly satisfying thing to do. I would recommend it.

Netflix
Titus Andromedon. Sorry, I just had to do it again.

Where does all this creativity come from? The brilliant minds of Tina Fey and Robert Carlock. Doesn’t that little shred of information just explain everything? I don’t mean to downplay Carlock or anything, but this is such a Tina Fey show. Although she created the show and serves as the showrunner, she didn’t actually write the scripts for many episodes. If she had, it may have solved a lot of the problems they had early on. The jokes in the first few episodes didn’t always hit their marks, and it’s clear that they didn’t come from the mind that brought us 30 Rock and Mean Girls. As I said before, though, it doesn’t take long before all the show’s problems are solved, and the last 75% of the season is pure gold.

I think the best review I’ve read of Unbreakable Kimmy Schmidt (other than this one, obviously… obviously) said that it “Fills a Pawnee-shaped hole in my heart.” Indeed, the inevitable conclusion of Parks and Recreation still looms heavily on many a loyal fan. Kimmy Schmidt’s shaky beginning and gradual evolution certainly reminds me of Parks & Rec, but what really justifies that comparison is the unflappable positivity. Both shows are about good people trying to do good things for each other, and in a world of Game of Thrones and Mad Men and, you know, all those shows about bad people doing bad things to each other, that comes as an all too rare breath of fresh air. I certainly look forward to season two.