Halloween is less than a week away! It’s about damn time. I hope you’re all prepared. I expect costumes, candy, and a mounting atmosphere of terror and gloom. That said, Halloween should really be a fun time. Let’s get scary, but try to avoid permanently scarring ourselves, okay? You know who’s great for fun horror? I’ll give you a hint: four of my last five articles were written about him. Yeah, spoiler alert: it’s Vincent Price.

The Plot: Having taken over the family mortuary business from his senile father-in-law (Boris Karloff), Waldo Trumbell (Vincent Price) and his darling gnome-like assistant Felix Gillie (Peter Lorre) have hit hard times. Let’s say you’re running a funeral parlor and you’re having trouble drumming up business. Well, you make business. In this case, that means you murder people. Obviously. Discovering murder to not be entirely cost-effective, Trumbell is still faced with financial turmoil. When his landlord Mr. John F. Black (Basil Rathbone) threatens him with eviction, he discovers a simple solution to both problems, and begins to develop a plan to murder Black.

I’m just going to read back a few names to you. Vincent Price. Peter Lorre. Boris Karloff. Basil Rathbone. How does that make you feel? If you’re answer is anything other than incredibly excited, you’re wrong and perhaps mentally unstable. Yes, this movie has an almost preternaturally amazing ensemble. Yes, it is named The Comedy of Terrors, and even though that is a reference to what is BY FAR my least favorite Shakespeare play, which is so bad it could itself use that extra “T” as a bit of a warning to unsuspecting audiences, that is an amazing, and perfectly punny title. 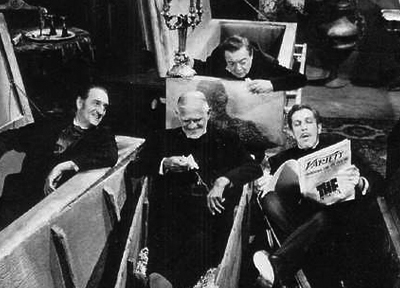 I’m not sure I actually have all that much to say about this movie other than the fact that it is exactly what you’d expect it to be. The humor is relentlessly slapstick. It’s not quite so-bad-it’s-good, though; more along the lines of so-bad-it’s-fascinating. Kind of like The Keep. I just want to wrap my head around the thought process that went into making this movie, and not just writing these jokes, but actually executing them fully. Is The Comedy of Terrors a good movie? No. Was it everything I hoped and dreamed it would be and more? Yes. Did I prefer to The Comedy of Errors. Exponentially. For example, thinking about it doesn’t make me mad in quite the same way thinking about its namesake does.

I think the important thing about this movie is that the actors clearly enjoyed themselves throughout the making of. Actually, I think a lot of fun was had by all. Boris Karloff clearly relishes not wearing heaps of makeup and only speaking incoherently, and in a similar case of anti-typecasting, Peter Lorre gets to be the romantic lead, a first if there ever was one. Of course, he doesn’t completely shake off his legacy, as the film is steeped in clever and subtle references to some of his most famous roles. My favorite reference being the musical paraphrasing of “In the Hall of the Mountain King,” which plays whenever he enters a scene, a nice little nod towards M. Most importantly of all is that nearly all of Basil Rathbone’s lines are Macbeth quotes. If you’ve never heard Basil Rathbone perform Macbeth, you’re missing out. You don’t even know how much you’re missing. I didn’t.

And then of course there’s the main man himself, Vincent Price. I don’t want to end every article with an exuberant exaltation of Mr. Price’s prowess, his adept skill as an artist and an entertainer, but alas, that is a difficult challenge of avoidance. With every new film of his I watch, I become more and more of a fanatical Price enthusiast. I understand that he was well loved in his own time as an iconic figure in the horror genre, but I just can’t wrap my head around why, in the name of Corman and all that is scary, he wasn’t a critical darling. Did people just not get him? I’m not saying that Price was a Peck, a Wayne, a Stewart, or a Burton, but he was a damn fine actor, and more importantly, he did something for the movies he made. The question was never how a film might serve his career, but how he might serve a film, how he might delve into a flat character and make him complex, how he might make something funny where there was no humor before, scary where there was but a hint of the macabre, how he might aid a director’s developing vision and, most importantly and I think most admirably, how he might entertain a great number of people. Watch any of his performances, big or small, and you will see an actor committed to his craft, but not too painfully serious about himself. This was a man who could laugh:

I mean, his favorite role was in The Great Mouse Detective. Which, speaking of, reminds me that it’s time to go. The next time we meet, dear reader(s), Octoberween will be a thing of the past, and we’ll have to wallow away for another eleven months until it hits again. In anticipation of that grim and sorrowful farewell: