Hunter X Hunter is a Japanese anime, that originated as a popular comic of the same name, and had a couple of iterations as an animated show. This article will be focusing on the 2011 anime. I feel like a common issue when I try to describe a particular anime to someone, is that either there is a lot to include in order to accurately depict what it is about, or I sound like a crazy person describing it. Hunter X Hunter runs into this problem as well. In a simple sense, it is about an optimistic and friendly boy named Gon, who is trying to find his father who left him when he was young to become a “Hunter”. A “Hunter” in this world describes a person who is part of the “Hunter Association” which is filled with people who do various jobs such as find lost treasure, hunt great beasts, do mercenary work, or even quell international disputes and crises. Gon, instead of harboring any hatred for his father who left him, decides that if his father wanted to be a “Hunter” so badly, it must be an amazing job and so he, himself, attempts to become one. That’s the short end of it. But over the length of the show the various arcs include things like an intense fighting tournament, a virtual reality game that one can physically enter into and compete in, strange creatures that gain the abilities tenfold of the things that they eat, and a girl with a strange power that is both a blessing and curse depending on how it is used. Add to the fact that later on the show reveals that people (mostly Hunters) can gain superhuman abilities through the use of an internal energy force known as “Nen” and you get even crazier things happening, like people who can turn into various vehicles, use a massive smoking pipe as a weapon, or have a suped-up version of Rock-Paper-Scizzors (that last one describes the powers that Gon eventually gets). See? Long-winded and crazy. Why do you do this to me, anime?

Insane premise aside, there is a lot of really emotionally powerful stuff in this show, mostly in the guise of Gon and his companions. One companion, Leorio, wants to become a doctor because as a child he lost a close friend to a debilitating illness that was curable, but required a surgery that he couldn’t afford.  Another companion, Kurapika, is on a personal vendetta to avenge his fallen race and to gain back the eyes that were stolen from them, due to the fact that his race’s eyes were considered valuable. Finally, we have what I believe to be the show’s most compelling character, Killua. Killua, comes from a family of assassins, and though he is very young, he is a merciless killer. But after befriending Gon, he begins to grow and change for the better. In the latter part of the series there is an arc where the tables turn, and Gon goes from his usually happy-go-lucky self to more serious when a friend of his father’s is attacked and gravely injured by an enemy. It is these last two character arcs that I’d like to focus on, and where I think the show is at its best.

Gon and Killua initially meet during the grueling physical test of the Hunter Examination. The two become fast friends as they compete in the examination’s various trials together. After both of them pass the test, the two were inseparable companions throughout the series as they went on adventure to adventure. Though their personalities seemed similar at first, both somewhat laid back, but excitable and childish, their deeper differences are rather shocking. Gon is extremely kind, optimistic, and empathetic to others, while Killua’s darker side includes an inclination towards violence and blood-lust. But because Gon was Killua’s first friend, Killua becomes unwaveringly loyal to him, and Gon’s “light”, as Killua calls it, has an undeniable effect on his character throughout the series. He goes from a merciless killer, to one who puts others before himself. He more freely expresses his thoughts and emotions, despite coming from a family and a job that pretty much brainwashed him to keep such things hidden. The moments where Killua and Gon are just having fun and acting like the kids that they are supposed to be are so much more happy and moving, because, as a viewer, you knew how long it took for Killua to get to enjoy such moments. But then the “Chimera Ant” arc happens. 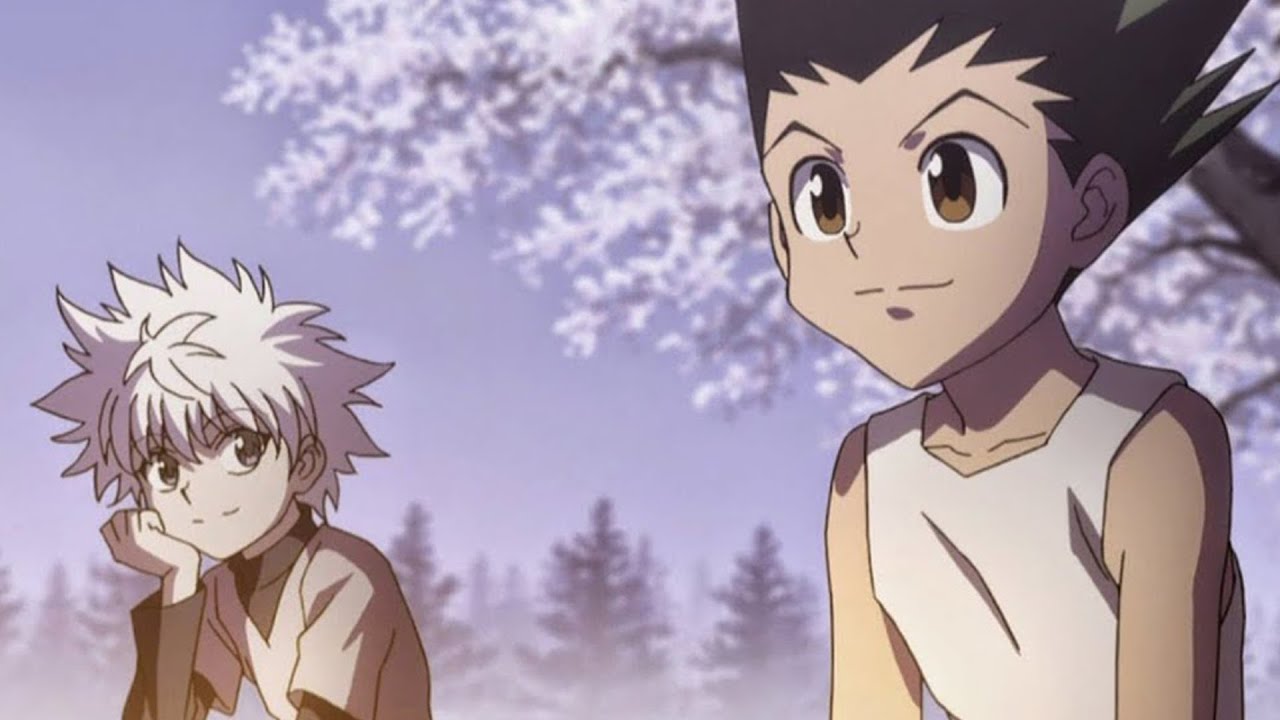 Madhouse
Why can’t the show just leave it at this and let them be happy?

This is where we get into SPOILER territory so be warned. I will try to keep things somewhat vague while also explaining the basic premise of the arc for the purposes of getting my points across. In the “Chimera Ant” arc, so-called because of the name of the creatures that make up the main enemies of the arc, Gon and Killua meet a friend of Gon’s father and must help him get rid of a dangerous race of creatures that have been eating humans and threaten to terrorize the entire world. This friend, named Kite, is defeated by a powerful chimera ant, and Gon and Killua’s abilities prove to be powerless. They run away and Gon, in particular, is determined to get stronger and fight the ant that defeated Kite. What follows is an interesting role reversal between Gon and Killua. This time it is Gon that has darker motives, while Killua must be the “light” for his best friend (END SPOILERS). These two character arcs and the show’s plot following such powerful acts of friendship and loyalty are what made me love the show. Madhouse
The Chimera Ants – creatures that gain the appearances and abilities of the animals they eat (including humans).

On the other hand, the show, and particularly the “Chimera Ant” arc and the one that comes after it, has some glaring flaws, that very nearly ruin the series for me. One of the main issues I have with the “Chimera Ant” arc is that it’s mood is rather different from the rest of the series in that it is much darker, more depressing, and much more gory and violent. The series as a whole has some pretty dark and disturbing parts to it, but most of the show balances that out with happier, fun, and goofy moments. We are brought along on an adventure to enjoy the world that these characters inhabit. But the Chimera Ant arc is more purely grim, and at times it seems like the show goes out of its way to show blood and gore to excess. The difference is rather jarring. I suppose that jarring feeling is intentional since the subject matter of the Chimera Ant arc is decidedly darker, as stated above in the spoilers section. But because of this I found the arc more of a slog to get through. It could also be called a slog purely because the arc is incredibly long, and takes up nearly half the series! Another thing that is weird is that neither Leorio nor Kurapika are in it, despite them being rather important and central characters in the first half of the series. Finally, what annoyed me most about the arc was the narrator. The series occasionally brought in a narrator to explain world-building details and whatnot and was rarely heard from for the first bunch of seasons. But for some reason, the narrator’s voice practically dominated in the Chimera Ant arc. It. Was. AWFUL! The addition of the narrator completely ruined certain key moments. It was terribly distracting to have a monotone narrator describe how a character was feeling in emotional moments and why they were feeling that way. The “show, don’t tell” mantra of writers was completely dashed in this arc, with the show refusing to allow moments that were meant to be silent, to be silent. Sadly, these aren’t the worst flaws of the series. It is in show’s final arc that keeps it from ending with any amount of a decent conclusion.

Unlike the Chimera Ant arc, the final arc, also the final season of the show is extremely short. It is only 12 episodes, compared to the Chimera Ant arc’s 61 episodes. This is its first problem. Right off the bat, there is pretty much no way to conclude such a long anime series in only twelve episodes. And while the Chimera Ant arc left out Leorio and Kurapika, this one leaves out Gon for a good chunk of it. It largely revolves around two plot points, (mild SPOILERS of the season’s premise) one is a story focusing on Killua and his sister, named Alluka who has a strange wish-granting ability, and the other is about the Hunter Association’s decision to appoint a new chairman. And who doesn’t want their action-packed series to end with long political debates with characters you only just met?  Besides the rather unnecessary politics of the final season, what actually bothers me more is the part of the story with Killua and Alluka. Alluka is brought in pretty much simply as a plot device. Her relationship with Killua, which is portrayed as very close, is undeserved. We spent the entire show developing Gon and Killua’s relationship, with the story (and that damn narrator) hammering into us that this was Killua’s first friend and the first time he’s made a connection with anyone. To suddenly bring in Alluka who he all of a sudden cares really deeply for, even though she has never even been mentioned up until this final season, kind of decreases the importance of Gon and Killua’s friendship and makes it lose some of its value. (END SPOILERS) Not only that, but the events in the Chimera Ant arc that nearly caused a rift in their friendship aren’t even dwelt on at all. Even Gon’s apology to Killua about how he treated him in his angry moments was half-assed and brushed off as a joke. It was really frustrating to have all that emotion that was piled up in the Chimera Ant arc amount to nothing and no growth between these two friends.

Madhouse
And, by God, there was a lot of emotion in the Chimera Ant arc!

Most frustrating of all is that it barely wraps anything up. The last episode makes sense as a last episode. But because the entire season was rushed, and we get practically no closure in ANY of the other story-lines, it feels lacking. I do understand that the reason behind the rushed finish was due to the fact that the manga’s author went on a long hiatus. In fact, that is why the show stopped in its first iteration in 1999. The 2011 version simply ended where the manga ended. And I suppose it is better than the series attempting to continue on with its own story-line. That has been known to work fairly well in other cases of anime such as Fullmetal Alchemist, and to a lesser extent Soul Eater. But much more often it leads to much poorer writing and a filler-like quality, such as what we see in longer running series like Naruto or Bleach. So in a way, I guess I am impressed that the anime decided to end instead of trying to stretch out its run and possibly make things worse. However, the end of this show really left a sour taste in my mouth and in a way undid a lot of the great things it had for most of its run. If you want a lot of good emotion, decent character writing, and intense action I do recommend this show, but be warned that you may be disappointed by its ending.