Ever since the unprecedented box office success of the first Avengers film, studios have been jumping on the “extended universe” bandwagon left and right. That’s why we have an awful Justice League series, and why we will soon be treated with King Arthur, Robin Hood, and Universal Monsters series in the Avengers style. Even Godzilla and King Kong are going to fight each other again in the coming years. Disney’s applying this same model to Star Wars, and unless Rogue One is the most unexpected flop in cinematic history, they will probably keep doing it forever.

When J.K. Rowling announced that she was penning a screenplay for Fantastic Beasts and Where to Find Them, a standalone spinoff movie taking place in the wizarding world of Harry Potter, I shrugged and thought, “Yeah, okay.” J.K. Rowling’s simultaneous gift and curse as a writer is world building. She’s great at doing just enough to grab the reader and immerse them in fantasy, but do not stop to think about anything for even a short while because it will fall apart. So, I thought another movie delving into the wider wizarding world would be nice, that it might clear up some inconsistencies in the books, and I was pretty sure that with a title like Fantastic Beasts and Where to Find Them, it would recapture the whimsical, child-friendly tone of the earlier Harry Potter books, and ultimately stand out as a pretty fun time at the movies. And then, before the movie’s release, Warner Bros. announced that this would act as part one in a five-film epic prequel series. So… I did not go into this movie with high hopes. 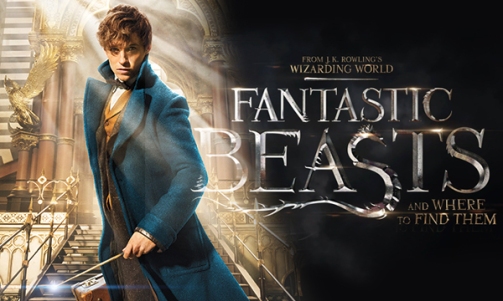 Fantastic Beasts and Where to Find Them (2016)

The Plot: English wizard and (super)naturalist Newt Scamander (Eddie Redmayne) arrives in New York in the 1920s with an enchanted briefcase filled with magical creatures. When some of his beasts escape and wreak havoc across the city, threatening to expose the highly secretive wizarding community, he teams up with disgraced Auror (which is like a wizard cop) Tina (Katherine Waterston) to track down his monsters. He also garners the unwanted attention of un-disgraced and definitely-up-to-something chief Auror Graves (Colin Farrell) who, for whatever nefarious reason, will stop at nothing to acquire Newt’s magical briefcase of fantastic beasts.

And that plot sounds pretty simply like a whimsical, lighthearted family fantasy adventure movie, yeah? For the most part, it begins that way. Rowling and director David Yates create a sense of looming threat early on with a mysterious, destructive black mass, an anti-wizard cult called the New Salemers, and references to the dark wizard Grindelwald (whom fans of the Harry Potter series will recognize as a sort of precursor to Voldemort; he got deep into the Deathly Hallows, found the Elder Wand, killed a bunch of people, etc. etc.). Despite these inappropriately doom-laden cutaway scenes, which contribute to a choppy narrative rhythm and severely damage the pace, the tone of the first hour or so is predominantly fun. Newt, Tina, and their bumbling muggle sidekick Kowalski (Dan Fogler) have a pretty whacky time hunting down magical creatures with silly names and goofy powers, most of which were clearly designed to sell toys. Amid the CGI mayhem and exposition-heavy dialogue, Rowling manages almost no character development whatsoever. Frankly, it’s not too crucial a requirement for a lighthearted fantasy adventure film. You can deal in archetypes if you’re just being fun and silly, and I won’t care too much. 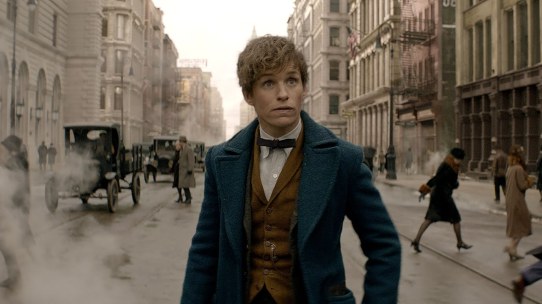 Warner Bros.
Which is good, because this man has no character at all.

Unfortunately, they’re not just being fun and silly. Desperate to tie this delightfully nonsensical adventure into a genocidal black magic conspiracy, the second half pulls a complete 180 on its tone. Now, I’m not sure if you know this about J.K. Rowling, but whenever she starts writing about genocidal dark wizards, her stories completely fall apart. She is the queen of plot holes. The Harry Potter series is abound with them, but it doesn’t matter in the first few, because nothing about silly children’s entertainment demands that you read too far into inconsistencies like that. That’s not the case when writing for adults, though. The first half of Fantastic Beasts makes no sense at all, and that’s great because it contributes, in that magical way, to the world-building. On that certain level, the Wizarding World isn’t supposed to make sense, and that’s what makes it so appealing to children. As soon as you try to mature that world, though, by adding murder and Nazi metaphors and all that other nasty stuff, the plot-holes morph from being fun, useful world-building tools into severely detrimental narrative problems. I don’t think Rowling has ever quite gotten that. The second half of Fantastic Beasts follows a sequence of one gaping, genuinely problematic plot hole after another, climaxing in nonsensical dribble. 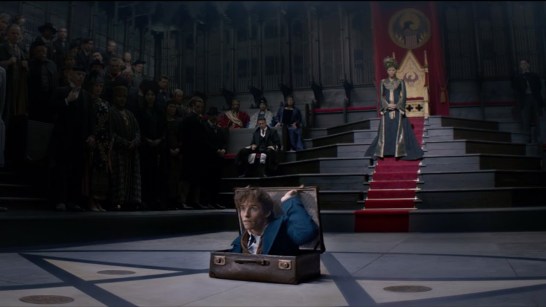 Warner Bros.
Oddly enough, this is the scene where the detrimental tonal shift really gets going.

So, here’s the thing: I grew up with the Harry Potter books and movies. As I hope I have made clear, those first few books hold a dear, dear place in my heart. Philosopher’s Stone through Prisoner of Azkaban are delightful books. Goblet of Fire needed to be heavily edited, but ultimately I liked it. Order of the Phoenix, when she completely abandoned everything I liked about the series, when she started writing not for children but for angsty teenagers, that’s when I stopped caring. Incidentally, I know a lot of diehard Potter nerds, many of whom have quite liked Fantastic Beasts. No one can deny its awkward pacing and inconsistent tone, but that needn’t be a deal breaker. I did not like Fantastic Beasts and Where to Find Them, but I also didn’t like the last three Harry Potter books. Gauge your own preferences.