I was sorely tempted to watch some better known Corman classics for my second Octoberween movie, but ultimately I couldn’t resist the temptations of Little Shop of Horrors. One of my favorite musical movies (see this list), directed by one of my favorite directors, with Jack…Nicholson?  This version stars Jonathan Haze as Seymour, who is apparently well-known in Corman movies, but not much else.

Remembering that Corman is known for his low-budget movies, you should know that this movie is black and white and the quality is…poor. You can barely see faces and barely hear the dialogue. I turned on subtitles and was the better for it. (At the time of this review, Little Shop is available to stream for free on Amazon Prime)

The musical was written based on this movie, and it appears Alan Menken and Howard Ashmore stayed pretty faithful to the original 1960 movie. The dentist is still a sadist, Seymour is still a nerd, Audrey is still cute and heavily accented. The 1960 movie is quirky as all get-out. I should note that the Corman film is not a musical, in case you were wanting or expecting music.

The camp of how ridiculously clumsy Seymour is is played up to the extreme. He flails wildly to get blood into the plant’s “mouth” after cutting himself on…a leaf, maybe? The first victim is a man that Seymour accidentally knocks unconscious and then into an oncoming train. This is ultimate slapstick/horror comedy. Audrey Jr (the plant, for the uninitiated) sounds a bittttt like a Valley Girl? I find myself reminiscing for the goofy baritone of the musical plant, but I accept this. There are a few really nice moments, like a clever bit with the detective/narrator and his boss, trading excellent dialogue through comedic timing to communicate a simple case assignment. 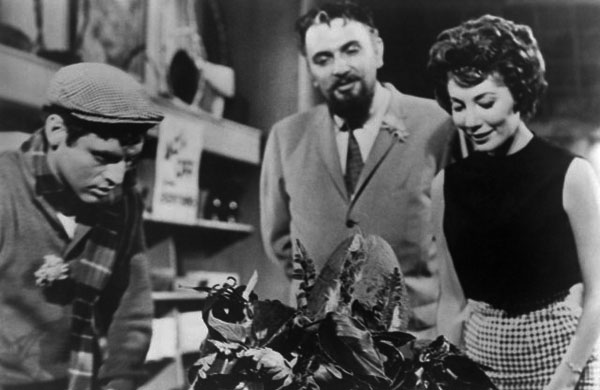 Overall, the pacing of the movie is as quirky as its characters, but it serves the film well. Scenes zip by with a truly theatrical quality (something I attribute to the low-budget) and the plot jogs quickly along. Nothing is sacred – exposition happens at light speed. Frankly, it’s a short movie, clocking in at just over an hour and while it occasionally feels rushed, I choose to believe the effect is intentional, with the goal of raising urgency, although tension is virtually non-existent. This is horror comedy with a heavy bend on the comedy. Mrs. Shiva comes in every day having lost a new family member to various causes, Seymour and Audrey initiate a budding romance while Mr. Mushnick freaks out about the size of Audrey Jr. at the same time. The movie is anxious, but the lighting fast pacing is usually comedic. There are a lot of cute little moments that really sell the experience.

“I’ve never meant to kill anybody in my whole life, and I’ve killed two in the last two days.” laments Seymour as he sadly feeds Audrey Jr.

I really like the idea of writer Charles B. Griffith sitting around and musing, “What if the plant just like, screamed at him for food?”

P.S. Jack Nicholson, by the way, plays the eager dental masochist (played by Bill Murray in the musical adaptation), doing his very best unhinged Jack Nicholson as he reads a magazine called ‘Pain’ and begs for the drill.

P.S.S. If I ever do burlesque or something I vow my name will be ‘Miss Hortense Fishtwanger’ because it is AMAZING.