I’ve been contributing to this blog every week for about the last three and a half years, and in that time have published 193 Second Breakfast articles. Today is my 194th. About fifteen percent of those articles have focused on Shakespeare adaptations or movies starring Vincent Price and/or Peter Cushing. I even wrote an entire, 2,000-word article about a movie trailer and recently dedicated a post to beards in fantasy movies. I’ve even twice degraded myself to talking about the Oscars. Somehow, though, in all this time, amongst all of these articles, I have not once written about Hollywood’s greatest cinematic icon, John Wayne.

Now, if I happened—like I think most of my generation—to hold Wayne in disapproval, or at least disinterest, then this oversight could perhaps be justified. But I don’t do that. I love John Wayne. Always have. And since this past Thursday marked his 109th birthday, now seems as appropriate a time as ever to rectify my negligence, and sing his praises for, somehow, the first time on this blog. 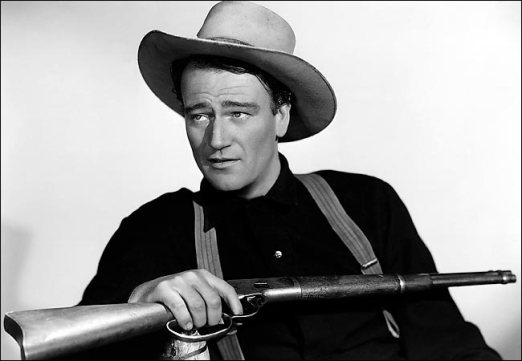 The Duke’s popularity has—and you’ll have to forgive me for this—waned in recent years, correlating with the fall of the Western genre and, if we’re being honest, a widespread disillusionment with the ideals of the old Hollywood. Before I go further, I’d like to set the record straight. Lots of people have opinions—positive or negative—of John Wayne and of what he stands for as a cultural icon. Regardless of political leanings and cinematic preferences, most people can generally agree that he represents an ideal of American masculinity. He’s a rough-riding, no nonsense, gun-slinging, outspoken cowboy. He’s a lot of things to a lot of different people: some continue to uphold him as a hero and others are determined to remove him from his place in American cultural history. I’ve watched a lot of his movies, and I’ve heard a lot of different ideas about him, but by my money, once you boil it down, there are only two qualities his characters consistently feature: honesty and conviction.

It’s also important to note, of course, that John Wayne is not the characters he portrays, but since most people seem unable to separate the actor from the role, I’m just going to conflate them for simplicity’s sake.

Conviction’s a tricky one, and I think it’s what garners him a lot of criticism. It can be interpreted as pigheadedness, pride, or arrogance, but not if you actually consider it within the context of the movies… which… for some reason people tend not to do… or maybe they just don’t watch the movies very carefully, or go in with preconceptions. Hard to say. Wayne’s characters always have a strong sense of right and wrong, and the conviction to stand by those values no matter what, even in some cases to the detriment of others or themselves.

For example: I recently watched Red River for the first time, a Howard Hawks western costarring Montgomery Clift and widely regarded as one of Wayne’s best performances (certainly his best non-Ford performance). Actually, upon seeing the film for the first time John Ford—who’d directed Wayne a few times since their 1939 premier collaboration in Stagecoach—reportedly exclaimed, “I didn’t know the son-of-a-bitch could act!” Anyway, Wayne plays Thomas Dunson, a frontiersman who together with Clift’s Matt Garth builds a cattle empire from nothing only to see the industry crumble in the wake of the Civil War. Hearing of business elsewhere, he begins herding his livestock hundreds of miles through a lawless Texan wilderness currently torn apart by warring Native American tribes and Confederate renegades. He adopts a zero-tolerance policy over the cowboys in his employ, but his tyranny soon leads to a growing threat of mutiny. Sensing the danger and fearing for the well-being of his father-figure, Garth leads the mutineers to ensure a peaceful resolution. Of course, Dunson doesn’t see it that way. What Garth intended as the most diplomatic solution only appears to Dunson as the ultimate betrayal: the boy he took in and raised after a devastating raid wiped out their whole wagon train has just overthrown his command. So, he swears vengeance. What could have easily been played as an antagonistic role, Wayne manages to turn into an incredibly deep and complicated performance, one that closely examines the strengths and weaknesses inherent in such an unwavering sense of right and wrong. A lot of people interpret that conviction as one-dimensional, wooden, or flat. On the contrary, I’d suggest that Wayne uses it to produce a complex cross-examination of the American ideal he had come to embody. This happens in most of his movies, and Red River isn’t necessarily the best one to watch as an example, it just happened to be the one I’d seen most recently. You can check out The Searchers, Stagecoach, 3 Godfathers, or… yeah, like I said, pretty much all of his other movies. 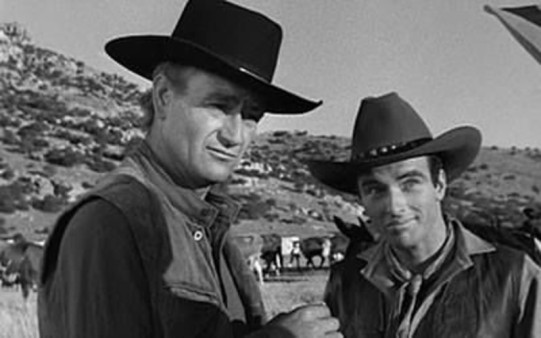 Charles K. Feldman Group
One of these guys looks like he’s been in a couple fights before.

As for honesty, though. The persona of John Wayne—both fictional and real—is akin to Abe Lincoln in its valuation of the truth. Wayne does not lie, he does not mince words, or beat around the bush, and that’s certainly caused some problems with some people in the past, because it doesn’t always come across as particularly polite (even though he’s usually the surest of gentlemen). To best exemplify this, I’d encourage you to watch the one movie in which he does tell a really big lie, consequently his greatest performance and greatest film: The Man Who Shot Liberty Valance.

John Wayne plays Tom Doniphan, who basically encompasses every heroic cowboy Wayne had played up to that date. He’s a great guy, an honest, hard worker who’s always on the right side of the law, having spent most of his life keeping order and justice in his small western town. Well, that’s someone else’s job now, and the town is well on its way to becoming a proper modern outpost, complete with newspaper, government, and a new schoolmaster Ransom Stoddard, played by James Stewart. So, Doniphan’s aiming to retire and move out the old ranch house he’s been fixing up, hopefully with the woman he loves Hallie, played by Vera Miles.

Sure enough, trouble brews when outlaw Liberty Valance (Lee Marvin) comes to town and starts harassing Stoddard, who eventually succumbs to Valance’s challenges and agrees to a duel, despite having no experience as a gunslinger. Spoilers ahead. By some miracle, Valance is shot dead in the gunfight and Stoddard becomes the big hero, having settled the last of the problems presented by the Old West. Assuming political office, he moves the town—and the whole state—forward to the modern world, even winning Hallie’s love. Doniphan’s left behind.

We discover later that it was Doniphan, lurking in a nearby alley, who shot Liberty Valance and saved Stoddard’s life, allowing Stoddard to take the credit and simultaneously, with it, all of his past glory and dreams for the future. The Man Who Shot Liberty Valance is, in many ways, John Ford and John Wayne’s send-off to the Western. Neither was done with it, but they both knew the end loomed on the horizon. It’s a poignant story of a man recognizing his own irrelevance, realizing that he is now surplus to requirement, and that he’s spent his whole life ensuring that someday he would be. It’s a heartbreaking, brilliant stroke of filmmaking from everyone involved, and perfectly sums up what makes Wayne so great. The Western, as it once existed, just doesn’t anymore. The film industry has moved on, and in many ways it was people like Ford and Wayne who ensured it would. As Doniphan represents and Old West, Wayne represents an old Hollywood, one that simply doesn’t exist anymore. Gone, but I firmly believe that it should not be forgotten, overlooked, written off, or in any way considered inferior. So, happy birthday to John Wayne, his characters, and everything they stood for.

One thought on “Second Breakfast: Looking Back on John Wayne”