I finally got around to these movies after some egging by my trivia frienemy (HAPPY BIRTHDAY SHANI), and boy am I glad I did. So glad, in fact, that I binge watched the first three movies.

If you haven’t seen Sleepaway Camp, you should. It has a fantastic twist. Truly fantastic. That being said, it’s going to be hard for me to talk about the other films without giving it away, so…uh, I’ll try.

Angela’s family has been killed in a boating accident, so she is adopted by her questionably-sane aunt, and is then sent to summer camp with her cousin Ricky. Now, Angela is understandably traumatized, and is therefore pretty quiet and kinda odd. Because kids are awful people (documented fact), she gets teased pretty relentlessly at camp by pretty much everyone that doesn’t understand her, which is, y’know, pretty much everyone.

This film has a filthy mouth. Just saying. Everyone just curses all the time, including small children and counselors, and no one does a thing about it. A pre-teen child quips something like, ‘Yeah, well he blows dogs,” or something crass during a baseball game. This movie also starts with a disgusting pedophile moment, so, be ready for that.

As far as slasher flicks go, the killing starts pretty quickly. I found the pacing pretty good, considering drama and such. All of the murders are filmed from the killer’s point of view, so it’s meant to be somewhat secretive who’s killing, but I think it’s pretty clear that it’s Angela the whole time, what with the character focus and all. That being said, the first few murders are subtle, made to look accidental, so suspicions are merely aroused but not confirmed. All of the knife-murders happen on the very last night, so there’s good escalation of action. Sometimes, I’m not really sure that some of the murders would kill someone (curling iron murder, I’m talking to you) but hey, I’ll go with it.

Now, I’m a 90’s kid, but I don’t remember men wearing midriff shirts, however apparently that was a thing.

There are a few scenes in movies that stick with me on a visceral level – one such scene is from The Last Exorcism of Emily Rose where actress Jennifer Carpenter is contorted on the floor when her boyfriend wakes up. Another is the end of this movie and the god-awful noises that emit from Angela coupled with the weird face. I’m getting heebie jeebies just thinking about it.

Easily my favorite of the three, this movie wastes no time getting to the murders. Angela is certifiably crazy in this movie, and it’s evident every second of every moment of this movie. She’s been released from they psych hospital and is masquerading as a counselor, and boy oh boy does she love camp.

If you’ve ever worked at a camp, then you might be familiar with the particular brand of Kool-Aid that is often served up. I did a stint one summer, and good lord. By the end of camp, my loyalty to the program and all the weird little songs/dances/calls we did was ridiculous. I STILL feel compelled to say ‘Sooooooo great!’ after someone says ‘great’. Just…take my word for it.

That being said, there are a metric ton of breasts in this movie, but much less male midriff. Gender equality, am I right? Also, less language, and it’s important to remember that Angela adopts the role of paladin in this movie. Lawful good. Smoke weed, get murdered. Flash? Get murdered. Show lackluster camp spirit? MURDER.

My least favorite of the three, unfortunately. Angela is back, and she still cares a lot about what people do, but this time the camp has been re-formed as a sort of bridge between ‘lower class’ and ‘upper class’ kids. To make them be friends. Obviously the rich kids are racist and the lower class kids want nothing to do with anything. Angela sneaks in by her doppelganger  with a semi truck. Yup. A semi. 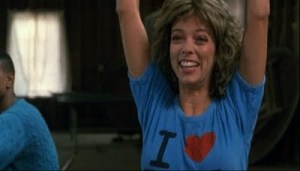 There’s a little Romeo & Juliet plot between two of the other campers, but it’s not long before we find out that literally everyone else is a jerk, counselors included (minus the cop dad). Naturally, jerks die. Forget Hannibal ‘eating the rude’, Angela straight up stabs the rude.

The other two films waste very little time getting to the killing, but in this movie it’s less than 24 hours before Angela starts a-killin’. This might be the reason I didn’t like it quite as much. It’s a little too abrupt. Angela is very preachy, and the murders are not as creative, and it’s really just kind of rushed and odd, ultimately not even fulfilling as a slasher movie. 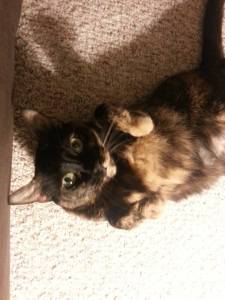 Here’s a picture of my cat to indicate the end of the review.

There are, believe it or not, more movies that follow these, all done in the 2000’s. There’s some confusion over timeline, and one film hasn’t been finished yet, so, I chose not to include them in this review. Someday, if you’re lucky, I’ll get around to it.