In the absence of a more serious hockey movie to review; (Rocket Richard’s film wasn’t available, and it had been far too long since I’d seen Slap Shot) Goon presented itself as a goofy alternative to the normal, high energy serious hockey film. I will admit to having low expectations; I had heard the film mentioned in various circles of hockey fans and Canadians and felt as though I would give Sean William Scott one final chance before completely throwing him into the discarded actors pile with such characters as Ben Affleck,  Owen Wilson, and Joaquin Phoenix. (I realize I just offended a great deal of people.) 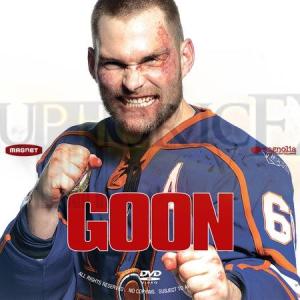 As a comedy, it stacks up pretty well. The main protagonist Doug Glatt, played by Sean William Scott, is an unintelligent security guard born into a disapproving Jewish family who expected a great deal more from him. At a local hockey game, Doug gets into a fight with a goon who climbed out of the penalty box ala 1970’s Boston Bruins, and catches the attention of one of the local beer league coaches. From there, he finds his true calling as a hockey enforcer (the typically derogatory term goon is used more affectionately in this case) despite the fact that he can hardly skate at all.

One of the running themes of the film is that effort and heart trump playing ability. Glatt makes the AHL (Or the non-copyright-infringing fictionalized minor league that is supposed to be the AHL) and rooms with a somewhat stereotypical French Canadian top prospect Xavier Laflamme, who after a serious concussion sustained on a hit by antagonist Ross Rhea (Played by Live Schreiber,) a long tenured NHL goon who, serving a suspension, was sent back down to the minor leagues to finish what is presumed to be his final season. Glatt’s job becomes to protect Laflamme, to make him feel more comfortable on the ice and to get his old confidence back. But over time, he takes on a much greater role within the team, while building his own personal rivalry (augmented by mutual respect) with Ross Rhea. 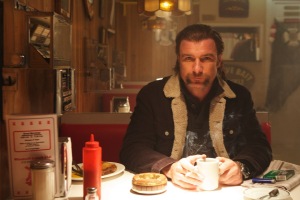 While Ross Rhea is the antagonist, he isn’t always painted in a negative light. He cheap-shots, hits up high, ect, but the film accepts these actions as a part of the game rather than outright condemning them. It becomes what amounts to a glowing endorsement of the role of the goon in a hockey team, with a bit of on honor code in play. If you hit our star player, we’ll do our best to beat the crap out of you. It is this code that explains why 99% of polled NHL players believe that fighting should still remain in the game, despite the fact that not a great deal of those players actually fight themselves.

I won’t say that if you don’t like this movie, you don’t get hockey. But if you like hockey, you should probably enjoy this thoroughly. Some of the play is a bit unrealistic, the players are caricatured a bit, but hey, it’s a comedy. Whether its Glatt’s benevolent and adorable idiocy, the alcoholic captain’s speeches involving more dialogue about divorce than about hockey, the metrosexual Russians, or the goalie from Regina, everyone who watches this film should have someone they can relate to. And laugh with.