Lesson – Revenge is a dish best served with poetic justice.

Here are some things I don’t do well with. Torture films, and people being cooked alive. GUESS WHAT THIS MOVIE IS ABOUT.

So, right off the bat we have a bakery serving ‘meat pies’, a la Sweeney Todd. And some straight up Hansel and Gretel (Yes, those are the actual names) sibling tiff. Some not so subtle analogies. “She’s had some sort of witchy spell over him,” quips Hansel. (No, I can’t get Zoolander out of my head either). This in regards to the stepmother, of course, who literally kicks them out of the house. 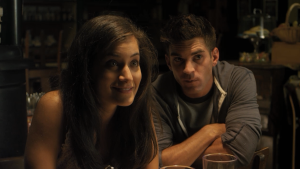 Actually, I wonder if they thought they were being clever when they wrote this, or if they just wanted to be super literal. There are close ups of Hansel eating candy while walking through the forest. I think I’ve demonstrated in over 30+ reviews that I prefer my homages to be subtle, but I also don’t know how seriously this film is intended to be a re-telling. There is a subtle Eric Clapton joke.

Oh. Have I mentioned that I dislike watching people eat sloppily? The scene in Pirates of the Carribean where Keira Knightley not so delicately rips into a turkey leg makes my stomach churn.

The Asylum
I…I’m a vegetarian!!

Here are some horror tropes I do not understand.

When confronting a possible suspect who then begins to act suspiciously, why do police turn their backs on the suspect to phone it in?

Also, when suspects decide to end that policeman’s life, why do they opt to do so after the police officer has stated where he is and who he’s with? 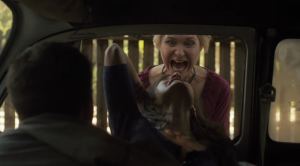 The Asylum
Yeah this about sums it up.

Although it makes me squeamish, allow me to make the following suggestions when raising humans for food.

1) Do not feed them simple carbohydrates and sugar.

2) Punching them in the stomach repeatedly is not an effective way to tenderize.

3) Poisoning them while they are alive in turn poisons the food you intend on consuming.

(That being said, I would love to see a Hansel and Gretel film that’s actually an expose on the meat packing industry, because, well, parallels).

There is a part of this movie where I actually had to pause it because I was going to vomit. This was proceeded by my telling my computer “NO. No. No. No. No.” Let it stand on record that I can sit through Evil Dead and be fine, but I cannot watch someone eat themselves. Couldn’t do it in Supernatural. Couldn’t do it in that one Scrubs dream sequence where JD eats chocolate Turk. Words cannot describe the heebie jeebies I am feeling.

Alright, so, as a movie, this wasn’t the worst one I’ve ever seen. It’s possible, of course, that  because this deals with things that actually creep me out I’m not biased. The practical effects were pretty decent, and there’s some solid prosthetics work going on throughout the movie. Actually, really the only issue with the SFX is that blood splatter/stains were often premature.

Like any ‘Asylum’ studio movie, this one is full of holes. Like a sieve. A lot of people suffer irrational injuries and come back from them (see pitchfork to stomach). There’s actually a scene where they have someone’s eyelids flutter after being near-decapitated in an earlier scene, but they don’t have her come back to life. The end is the most noticeable, where there is, in fact an entrance and an exit but that seems to escape the witch’s head.

There are some baking inconsistencies too. I know this is picky, but! If the witch is a professional baker, she does not need to go out to buy frosting – she makes her own frosting. Also, she does not leave several dozen eggs out. The witch, by the way, is named ‘Lilith’, aka the female Satan spawn (bride?). The knowledge of the background changes Frasier forever. 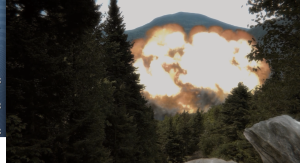 The Asylum
There’s no reason for this explosion.

The dialogue wasn’t painful. The plot was okay, if a little transparent. People are disposable, so don’t get attached to anyone. It suffers from some logic leaps, but that’s an ‘Asylum’ film for you.